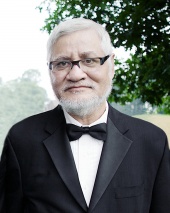 On Tuesday, January 10th, 2017, Issac Maricar, passed away surrounded by his family.

He is survived by his wife and best friend Faritha, his son Winston (Nikki) and his grandsons (Ethan and Quinn). He will also be forever remembered by his extended family and friends.

Born in Saigon, Issac was a strong-willed man who once worked for the UN supporting Vietnamese refugees to settle into new countries. He was multilingual; fluent in Vietnamese, English, French and Cantonese.

A visitation will be held at :

The family has asked that in lieu of flowers, memorial donations be made to Parkinson’s Canada.