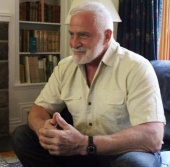 At Verdun, on July 13 2021, at the age of 75, M. René Dupont passed away peacefully at home, surrounded by his loved ones and his partner Withia Ou.

Rene also leaves behind his beloved 2 cats, Alley & Boo.  They are his angels and babies…Alley especially who was always as watchful and caring just like a nurse can be until the end.

The family wish to acknowledge the exceptional home care he received from the CLSC Verdun staffs and especially grateful to the family’s doctor, nurses for their compassion and dedication.

In order to respect Rene’s last wishes, family & friends will gather in a Life Celebrations at the appropriate time.

In lieu of flowers, your expressions of sympathy can result in a donation to your local animal shelter.

Born in Pembroke, on June 17 1946, Mr Rene Dupont has graduated from University of Waterloo ( Ontario ), class of 1969. After graduating, Rene moved to Montréal to start his career. He was employed by Bell Canada from 1972 to 1986.

Throughout his career, Rene was involved in many charitable events. A few ended up in televised events with local celebrities.

During the early 80’s, while on the executive fast track with Bell Canada, Rene Dupont spent his 4 years in Saudi Arabia as assistant director of budget and planning on project upgrading the kingdom’s telephone systems. During his time there, he travelled in quite a few countries, observing different cultures and ways of life. He underwent a change-a subtle one, that began to affect the course of his life. “ i learned to look at life through different eyes,” as he put it.

When he returned to Toronto, he stepped down from 13 good years on the corporate ladder. He never looked back. He started a successful retail business with his friend Keith Norton. They teamed up in an outlet company call Water Clinic, a downtown Toronto store. When Keith Norton was Ontario’s Minister of the Environment from 1981 to 1983, he assured the public that Toronto tap water was safe to drink. Mr Norton bought a half interest in the Water Clinic, which sell filtration systems that remove toxins from drinking water. In 1988, M. Dupont sold his share then move to Waterloo, Iowa in 1989.

Rene began his new venture along side his longtime friend Bryan NichoIs. Under the name of Dupont/Nichols Group, the company specializes in developing Loft apartments and retail space in downtown Waterloo. They first started their business in one of the buildings they owned before moving into the Black’s Building, a “Ground Zero” for downtown redevelopment as Rene put it.

Revitalizing the core of a city and uncovering a rich heritage of downtown Waterloo (Iowa) was M Rene Dupont most ambitious projects…And he was doing it one brick at a time. For the city, the team Dupont /Nichols has become a new breed of visionaries, a major player and catalyst to revitalize the city. They operated Techline Office Products (specializes in office furniture and cabinetry) and an interior design studio for nearly 10 years.

In the early 90’s, Rene invited a friend from New York City, Tom Gallaher , urban planner, to joint the group. From that time on, thanks to the Dupont/Nichols Group, along with other residents, the Waterloo downtown area was thriving again. Among the projects of revitalization, Silos and Smokestacks has become part of the National Heritage Park in 1996.

At one point, the Dupont/Nichols group owned five buildings downtown, all which were renovated into loft apartments and/or retail space. They built the first loft which set the trend to so much more to come.

The Dupont/Nichols Group sold their company in 2007, just before the market crashed in 2008. In 2012 M. Dupont returned to Montreal until his passing away.

To the man with a heart of gold, humble, caring and kind was his middle name.

He’s everybody’s uncle and Dad, the dad we all wish we had had.

Even though some people have never met him in person, he’s everyone’s Best Friend.

Body of steel, the look of love ; combined with a great sense of humour and a killer smile, he got that charisma , that presence, that power of attraction that everybody wanted a piece of him.

He’s a man with great convictions along with a great sense of justice and fairness.  A strong character he was,  but yet, he didn’t shy to show his vulnerability.

He was a man with a great sense of wonder that connected him to the nature of life and to the people he met…His curiosity never ceased to amaze me…from Africa to Antarctica, from Titanic to the moon landing, from Nick Cave to Johnny Cash…it was a real treat to hear him talk with such an array of hindsight…he’s the perfect companion for the morning coffee and certainly for the Happy Hours.

Catholic born, spiritual he has become…Wise man full wit and wisdoms , a Jedi or Gandalf he has become ; Politics was his battleground ; 9/11 was the trigger point ; and now, Covid is his unfinished battle…From that moment on, he started questioning everything…politically, socially economically…he saw the world through different lenses…To him, left wing and right wing belong to the same bird. He’s more into the policy of truth. He like to dive deep into the rabbit hole to see who’s really pulling the strings…He’s a real truth seeker, a critical thinker…A real free spirited man he has become.

His passage on earth has touched many hearts, broke a few and he will be greatly missed from all of us, friends & families.

He had said it clear, He had state his case, of which he was certain. He had live a life that’s full, and traveled each and every highway. And more, much more than this, he did it His Way…For that, i salute his courage and determination.

I thank you for all the sweet little things called love…glad that i had give you a place you can call home…a happy one.

It was a privilege, an honour to have you by my side and being the closing chapter of your fulfilling life…and most of all, got you to the finish line.

So sorry for your loss. Wrote something on your poem and the picture of both of you.

I knew Rene for many years, in fact one third of my life.
Through those years I always knew Rene to be a man of integrity, was never shy to say what he had on his mind.
I learned so much over those years from him , that is part of me today.
So many memories I have involve him, and projects we worked on, that lead me to my current profession.
So so long Rene, part of you will always live on in me.
I hope where ever you are today you are happy, and at peace.
We will all miss you very much..

My sincere condolences for the loss of Mr. Dupont.

I would like to buy a piece of property in Martin County Florida that is still in his name. The property taxes for 2021 were not paid, so it might not be known to his family that he owned this property. Please contact me.

You cannot be present or you wish to offer something ?

We will personally deliver it to the family